This is a cross-posting of a piece I originally wrote for Kindle Fire on Kindle Nation Daily. It is reprinted here in full with that site’s permission. 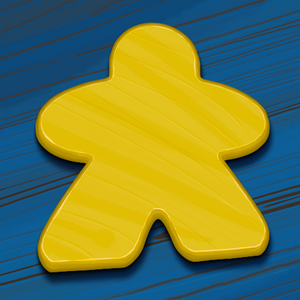 I am a HUGE fan of games of all sorts, including board games, so it came as a real shock to me that I’d never heard of Carcassonne (4/5 stars, currently priced at $4.99) before I came across it in the form of a Kindle Fire game app—it’s also available for other Android devices in the Google Play store, and for Apple devices in the iTunes App Store. Carcassonne is a turn-based strategy game about empire-building, and even though it was only invented in 2000, it’s become a hugely popular board game in Europe.

When you hear “empire building” you may be thinking of Risk, but this game doesn’t involve careful management of invading armies and weaponry. Instead, players take turns laying down tiles with pictures of different pieces of landscape features on them (e.g., roads, city walls, cloisters, rivers, fields) and laying claim to those features by placing “followers” on them, in order to score points at the end of the game. Here is a very basic description of how Carcassonne works, from Wikipedia:

The game board is a medieval landscape built by the players as the game progresses. The game starts with a single terrain tile face up and 71 others shuffled face down for the players to draw from. On each turn a player draws a new terrain tile and places it adjacent to tiles that are already face up. The new tile must be placed in a way that extends features on the tiles it abuts: roads must connect to roads, fields to fields, and cities to cities.

After placing each new tile, the placing player may opt to station a piece (called a “follower”) on a feature of that newly-placed tile…The game ends when the last tile has been placed. At that time, all features (including fields) score points for the players with the most followers on them. The player with the most points wins the game. 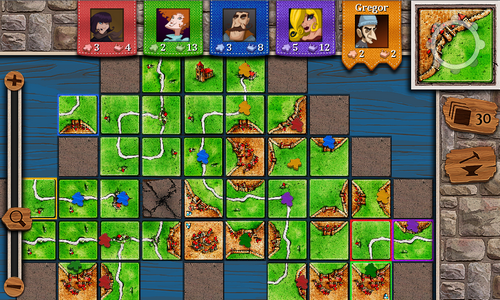 But as I said, that’s a VERY basic description. If you want a much more thorough set of game rules, strategies and examples of play, see this wonderfully detailed yet easy to understand (and free!) guide: Carcassonne Annotated Rules Version 4.0.  **UPDATE 6/25/14** note that this document was originally created by, and is still the intellectual property of, Hobby Kingdom, but that site is no longer hosting the document so I’ve brought it over here to my own site.

It’s a full-color document in pdf format, and if you’re serious about playing Carcassonne I highly recommend it because the game app only includes a pretty sparse tutorial that doesn’t come anywhere near covering all the bases you’ll need to know when formulating your gameplay strategies.

The guide was written with the board game in mind, and it covers a lot of “expansion packs” that aren’t applicable to the app version of the game. Just ignore those parts, and focus on the parts of the guide that explain the basic game and basic scoring.

As you can imagine, the winning strategy for Carcassonne is to maximize your own completed ‘features’ like roads and cities, while simultaneously preventing your opponents from completing theirs through crafty tile placement. For example, there are only a limited number of tiles that contain both a piece of a city wall and a road leading into the city, so placing a road piece right next to an opponent’s incomplete city reduces that opponent’s chances of ever completing his city.

As you can see in the screen shot above, in the game app, when there are no tiles remaining that can possibly be played in a given space, that space is blocked out with a cracked, gray square of stone. It may be that the tile played immediately beneath the cracked stone square is the one that prevented the green player from being able to complete his city wall.

You can turn off the computer opponents’ commentary if you like. 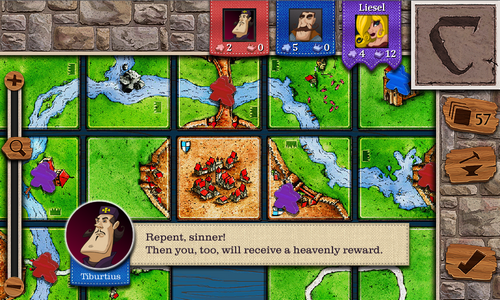 Further complicating matters, each player only gets 7 “followers” to use when laying claim to various features, and while you get a follower back each time you complete a road, city or cloister, any followers placed on incomplete features, or used to lay claim to fields, are NEVER returned to you—at least, not until the end of the game, when final scoring occurs.

Advantages of the App Version of Carcassonne
I already mentioned how the app automatically indicates unplayable squares with cracked stone, but there are other advantages the app version of this game has over the real-life, board game version.

Perhaps most importantly, when it’s your turn the app automatically highlights all the possible locations where you can play the tile you’ve drawn. When playing the real-life version, there would be quite a lot of trial and error, and you might miss an advantageous tile placement option due to simple oversight.

You can view all the remaining available tiles at any time in the game app. 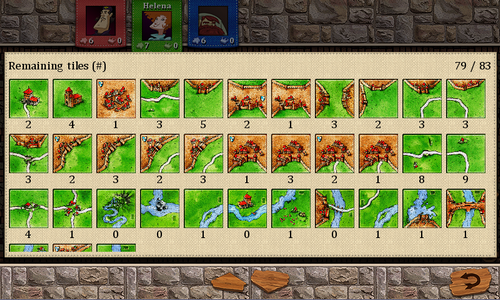 Another big advantage with the app is that you can view all of the tiles that have yet to be played at any time. This can be invaluable when you’re trying to decide between two or three possible tile placements, and need to know whether or not the tile(s) you need to complete your desired feature is/are even available.

The app also allows you to play against up to four opponents: either computer opponents, real life players, or a mixture of both. When playing against real people, you simply take turns passing the Fire back and forth as you play. With computer opponents, you can choose the opponents’ skill level.

Finally, the app handles all the complicated scoring for you, so there’s never any doubt about whether or not each player received full and proper credit for all of his or her plays.

One Glitch…
I’ve noticed one minor glitch in the app, but it’s no big deal. When I first launch Carcassonne, it automatically loads and displays the on-screen keyboard. This is easy enough to resolve, I just tap the side of my screen to open the menu and then tap the ‘back’ arrow to return to the start screen and close the keyboard.

My Take
I got a pretty rocky start with the Carcassonne game app due to the paltry tutorial, but even so, I was interested enough to hang in there and do some Googling to learn more about how the game is played—and won! Once I found the pdf guide I’ve linked to above, the game became much easier to understand and far more enjoyable.

Since then, I’ve become a real Carcassonne addict. I find myself playing a round or two nearly every day since I got this fantastic app. Even with the tutorial limitations and the keyboard display glitch, I’d still rate it 5/5 stars and found it entirely worth the (current, in the Amazon App Store) $4.99 pricetag.